Scroll down for more ways to listen.

King Kimbit is a literary Hip-Hop artist born and raised on unceded Algonquin territory (Ottawa). King is passionate about empowering and encouraging youth, community care, and sharing love through writing, reciting, and the abolition of punitive, carceral institutions. King became Urban Legends Poetry Slam Champion in 2012, which launched her career in performance arts. In 2017, King released her debut album Life Lessons Poetically, a collection of poetic and music by artists local and abroad. She is now working on her new project, Healing Trauma From The Projects.

Being of the Vietnamese Diaspora, King has reached for her roots through various organizations, holding executive positions in local and regional VSAs, as well as performing and presenting for the Union of North American Vietnamese Students Association in Anaheim, New Orleans, and Seattle. She was also cohost of Spirit of Vietnam on CKCU 93.1FM

King has coordinated Youth Speak! writing and performance workshops for teens and is also 1/3 of the founding force behind Cap City Cyphers, a space for rappers across the city to unite and celebrate love and unity through Hip-Hop. King is currently a writer and vocalist for Speaking Vibrations, an interdisciplinary performance group with tap dancer Carmelle Cachero, ASL poet Jo-Anne Bryan, and contemporary dancer Jordan Samonas. 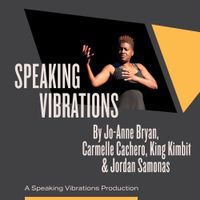 created by Jo-Anne Bryan, Carmelle Cachero, King Kimbit & Jordan Samonas Speaking Vibrations is the next evolution of theatre: an immersive, inclusive and multi-sensory experience in ASL song/poetry, music, rhythm tap & dance. Sound, song and story are experienced visually through projected graphics and dynamic captions, as well as tactically through feeling and vibration; in-person audiences will get to wear and hold vibrotactile stimuli (vibrating vests, seats, belts & pillows) during the performance while audiences at home experience the show with remote technology.

a single sign told a story she lifts her hand. sound moved through her and within me she signs my sensations. my fears and dreams fell out in her rhythm something stirs in me what happens when I come into contact with a body in all its forms? when I see in my feet, hear in my hands and speak in vibrations?

Image Description: A geometric cut out of a photo of Jo-Anne Bryan, a woman with dark short cropped hair and a black dress, is photographed making an ASL gesture. Her right hand held away from her with palm facing her, her left reaches towards it. Want to see this show?